A client from Corpus Christi, Texas, came to Bay Area Audio Visions to upgrade his 2017 Ford F-350’s audio system. It is not a stretch to say that these vehicles are among our specialties. We had installed a system in this client’s previous vehicle, and he wanted us to transfer over as much of it as possible. This truck was the first 2017 Super Duty we have worked on, and we wanted to make it look cool. The client was on board with our plan and told us to “do what we do.”

We used a Helix DSP to serve as our factory integration and tuning solution for the system. After measuring the frequency response of each channel of the factory amplifier, we summed the door woofers and tweeters together in the Helix DSP.

The client had a JL Audio HD750/1 to power the subwoofers and an HD600/4 to power the front and rear speakers. We mounted the amplifiers under the rear seat behind the subwoofer enclosure. The subwoofer amp can provide up to 750 watts of power to the trio of subs. The HD600/4 will produce up to 150 watts per channel into the two pair of speakers.

The rear doors got upgraded with C5 coaxial speakers and Hushmat sound proofing.

We added a JL Audio logo to the grilles on the front doors for a special touch.

For the front of the truck, we installed a set of JL Audio C5-570 component speakers from the customer’s previous vehicle. We fabricated adapters for the woofers from the set out of Sintra to mount them in the 6×9 locations in the doors. Once we secured the adapters in place, we treated the doors to a layer of HushMat Ultra sound-deadening material. We added a set of Fast Rings speaker baffles to help direct speaker output into the interior of the vehicle and keep it from echoing around in the doors. The tweeters from the C5-570 set are in the factory locations in the A-pillars.

The client had a second set of 5×7 speakers, but there was no way to make them fit. We took them back and gave him credit toward the purchase of these JL Audio CS-535 coaxial speakers. Once again, we treated the rear doors with HushMat Ultra and used Fast Rings baffles.

The mirrored acrylic trim ring matches the accents in the truck.

The three 10″ subwoofers fit perfectly in a down-firing configuration.

The trim plate from a JL Audio amplifier was used as a center piece for the enclosure design.

It’s hard to believe 3 10″ subwoofers fit so cleanly under the rear seat!

The layered inserts really make the front of this enclosure stand out.

The client made it clear that he wanted good, solid bass from the new system. To meet his needs, we created a subwoofer enclosure that would fit under the rear seats of the truck. We build a new custom enclosure for the trio of JL Audio 10TW3 subs from his previous vehicle. We created several 2-inch thick spacers to elevate the bottom of the enclosure away from the factory carpet and allow the sound from the down-firing subs to radiate forward into the listening area.

We put some extra work into the front of the enclosure, since this was the only visible component of the new audio system. In the center is an aluminum trim cover from a JL XDv2 amplifier. We surrounded this trim with perforated vinyl and a mirrored Plexiglas trim piece to mimic the chrome accent pieces in the dash and doors, and the leather in the seats. We wrapped the wings that extend outward from the center in the same perforated vinyl. We used gray vinyl in the center of the wings and wrapped the remainder of the enclosure in a more heavily textured vinyl that matches the seat upholstery.

We finished the project by tuning the Helix DSP with our RTA and calibrated microphone. The result was clear and detailed sound with a good soundstage in front of the driver. With 1,350 watts of power available, the system gets very loud and sounds excellent. We knew the client would be pleased.

The client returned to Bay Area Audio Visions to hear the new system for the first time. He was stunned by how much better it sounded at both low and high volumes. The client returned a few weeks later to let us know he had shown the system to a few co-workers and they were blown away by how great it sounded and how much gear we had installed.

If you are in the market for an audio upgrade to your car or truck, drop into our shop or reach us by e-mail HERE. We would be happy to assist you. 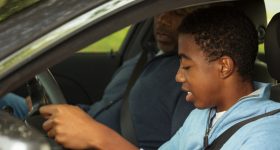 Did you know that teenage drivers are three times more likely to be involved in a motor vehicle accident than those who are 20 or older? With their … END_OF_DOCUMENT_TOKEN_TO_BE_REPLACED