What do you do when you own arguably the most affordable supercar in the world? Well, you make it even more super by upgrading the very feeble stock Bose stereo system, of course!

Client Wanted A Stereo System That Matched The Car’s Performance

This client came to us wanting a 2010 Nissan GT-R audio upgrade. He was less than impressed by the “premium” sound system in his almost-$100,000 car. He knew the car deserved better, he knew he wanted a lot better and he knew – based on past dealings with us through the car dealership where he worked – that we were the only ones to do the job. His goals were simple (in his mind, anyway): Integrate an audio system with a performance level to match the car; highlight the system in such a way that it could stand out at shows, yet not detract from the car’s sleek style; and – most of all – don’t take up too much space in the already small interior. Our answer to him: Challenge accepted!

First things first. Even though the GT-R came with the factory premium system and already had an in-dash navigation radio with all the bells and whistles, it was still lacking a basic backup camera. The low stance of the car and its wide, thick back end compromised rear visibility. A Boyo bar type rear view camera mounted to the license plate fixed all that and an RGB video interface from Nav-TV made it all possible to work like factory. A second video input allows passengers to watch movies on long trips on the DVD player stashed away in the glove box.

A host of electronic components help to shape the audio signal in this GT-R.

Audio from the trunk lid mounted tablet can be played through the stereo system.

Once the video portion of the upgrades was taken care of, our attention turned to the audio system. Because we were keeping the above-mentioned factory radio, we used the Cleansweep series of OE integration products from JL Audio. A CL-SSi takes the fragmented signal from the factory amp and sums it all back together into a full-range signal before passing it directly to a CL441dsp. This piece then essentially “un-equalizes” everything in the speed-dependent EQ and volume-dependent EQ of the Bose amp to make a nice, flat signal to send to the last processor in the chain, an Audio Control EQS. This six-channel, 13-band equalizer allows total control of the system’s tonal adjustment. With the Cleansweep pieces, it is now possible to get great sound out of a factory radio.

A third Cleansweep product, the CL-SES allows switching of the DVD player’s audio and an Apple iPad, mounted in the car’s trunk lid, to play through the system. All of these components are showcased in a perforated suede compartment in the trunk where the spare tire would normally be located. The compartment is now covered in 1/2″ clear acrylic with the GT-R logo custom machined out of it and the shop logo is etched underneath. The acrylic is edge-lit for a cool effect and the whole thing is trimmed in matching black vinyl. Furthermore, all of the system’s power and ground distribution is neatly arranged in between the other components. A carpeted panel can be put in place for everyday driving and protection

A perfect fit! The JL Audio amplifiers were small enough to fit in the space between the rear seats.

The well-processed signal now travels on to the amplifiers of the system. We knew we wanted three separate amplifiers, but also that we didn’t have a lot of space to work with. We naturally turned to JL Audio XD series amplifiers for their great sound and compact size. An XD600/6 six-channel amplifier runs all of mid- and high-range speakers at 100 watts each, and two XD600/1 mono amplifiers drive the two subwoofers. The amplifiers were mounted to a custom amp rack that takes the place of the factory Bose subwoofer enclosure between the rear seat backs. Trimmed in more gray suede and a black acrylic accent ring, the highlighted amp rack shows off just how much power can be packed into such a small space.

More red LEDs give an ominous glow to everything when turned on. All the amps are very serviceable and any adjustments can be made quite easily.

Two midbasses, a tweeter and two passive crossovers were all fit in the bottom part of the GT-R door.

The JL Audio C3 speakers were installed with acrylic borders that are backlit with red LED lighting.

The door upgrade gave the client just what he wanted, much better sound, with a more sporty look.

For the speakers and subwoofers, we again called upon JL Audio products. We knew we wanted more sound than the simple two-way component in the factory doors and that we had to make more of a visual impact as well. To that end, we took apart the bottom section of each door and re-constructed them to house a pair of C3-650 components. We mounted the two 6.5″ midbass/midrange speakers side by side with one of the 1″ silk dome tweeters just in-between them. Then we flush-trimmed the speakers with a panel of 1/8″ black acrylic, laminated to 1/2″ clear acrylic and edge-lit with red LEDs for more cool show accents. The passive crossovers are mounted in a similar fashion toward the rear of the door. A factory GT-R emblem tops everything off and gives that little something extra.

We covered the lower section of the doors in matching black vinyl and put them back together with the upper section, with a gray suede accent strip to tie everything together from front to back. The second tweeter from each door pair is on top of the dash for added stage height, and the third pair of speakers, a set of JL Audio C2-350 coaxials, replaced the factory speakers on the rear deck.

One JL Audio subwoofer on each side of the rear seats provides the client with big bass and almost no usable space sacrificed.

Very few subwoofers could fit in these tight confines!

For the subwoofers, we wanted to prove that big bass doesn’t always require big space. So we enlisted a couple of JL Audio 13TW5 thin-line shallow depth subwoofers to showcase this very thing. Since they are only 2.5″ deep, we knew we could fit them just about anywhere that their diameter would allow, but getting the all-important required enclosure volume still proved to be quite the task. We didn’t want to put them in the obvious location of the trunk, so we explored other alternatives. With suitable real estate and potential volume factored in, we chose the interior rear quarter panel area to flush-mount the 13.5″ subwoofers. We fabricated a fiberglass enclosure on each side for each cavity and bolted each finished enclosure to the car for safety and security.

We also modified and re-upholstered the interior trim panel for a seamless, matching finish. A JL Audio grille protects the subwoofer’s cones and a gray suede trim ring with another black acrylic accent ring finished it all off by hiding any mounting screws. More red LEDs edge-lit the clear acrylic that is part of the trim ring giving everything a subtly accented highlight when in show mode. Generous amounts of Hushmat sound deadening material takes care of any unwanted vibrations from the subwoofers being mounted to the interior and helps control the massive amount of bass generated.

When showing the car, it is possible to have the doors and trunk open to display all of the electronics while playing the system too and having virtually no loss of low-end bass. Probably the biggest compliment for our efforts is the common question, “Where are the subs?” Because they take up no more interior room than the arm rest that was originally in that space, most people are hard-pressed to notice them – even when we tell them to look inside the car.

Did we succeed with our mission?

Three for three. We’ll take it. 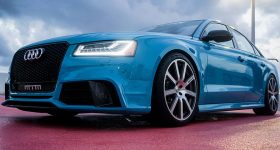 If you drive an Audi car or SUV, your local specialty mobile enhancement retailer offers a variety of entertainment and safety upgrades. Whether you … END_OF_DOCUMENT_TOKEN_TO_BE_REPLACED